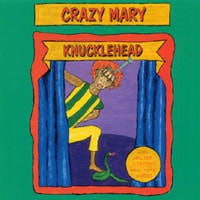 Knucklehead is the fifth release from Crazy Mary an eclectic band based out of New York City. Crazy as it sounds the band members meet and formed through various jobs at the Bronx Zoo. I don’t know if there is a song about it but diversity is the signature style of the group. It is very hard to categorize Crazy Mary as their unique music is a mix of garage band, retro, 90’s psychedelic and synthetic sounds. There are also traces of pop, rock, British and possible alternative. Their songs are an exotic mix of electronics, spacey guitars and funky beats. On this collection they are joined by avant-garde violinist Walter Steding and the New York Horns, thus giving their assorted tunes even more variety. This thirteen-track collection features both male and female vocals. ‘Brian Jones’ is a pert tribute to Jones. The track incorporates funky electronic sounds with subtle sampling of ‘Please Go Home’ by The Stones. It is a creative mix of alternative sounds and classic rock. ‘Land of Jagged Mountains’ features Charles Kibel playing electric sitar giving this track a spacey Middle Eastern feel. Sophia Jackson on vocals and finger cymbals is hypnotic. Creative beats, sharp guitars and the violin complete the scene. It is followed by ‘Still Water’, which has an energetic blues vibe thanks to organ tones, cool beats, slide guitar and the harmonica. Crazy Mary is zany and fun and they cover a wide range of sounds on their latest release Knucklehead! -Laura Turner Lynch

AMG REVIEW: When it comes to music, the term “self-indulgent” can easily be used in a derogatory fashion. But self-indulgence isn’t necessarily a bad thing; in fact, it can actually be a plus if the artist’s creativity is at a high level. Jazz great Ornette Coleman, for example, can be very self-indulgent, but he’s so imaginative that his excesses can be forgiven—or even enjoyed. The term “self-indulgent” easily describes Crazy Mary’s Knucklehead, which is every bit as goofy, bizarre, quirky and eccentric as their previous release, Burning Into the Spirit World. It’s also memorable and highly creative; Knucklehead is self-indulgent in the good sense. Drawing on influences that range from Frank Zappa to the B-52s to all kinds of ‘60s music, Crazy Mary provides alternative rock that is off-center yet oddly infectious. The New Yorkers’ appreciation of ‘60s music (everything from psychedelic rock to the girl group sound to Memphis soul) is strong, but tracks like “Brian Jones” (an ode to the late Rolling Stones guitarist, who died in 1969), “Invisible” and the Stax-tinged “When the Shit Hits the Fan” don’t sound dated—Knucklehead is still a product of the post-‘80s alternative rock world. Crazy Mary knows how to combine influences from different eras, and they also know how to be totally unpredictable without sounding confused or unfocused. The band will bring a strong Middle Eastern influence to “Land of Jagged Mountains” only to turn around and acknowledge blues-rock on the 12-bar “Still Water”, and whatever they do, Crazy Mary has no problem being distinctive and recognizable. Knucklehead is an appealing addition to the New Yorkers’ catalog—excesses and all. -Alex Henderson

Knucklehead is Crazy Mary’s fifth album, a landmark achievement for any indie band. Actually, it’s a landmark that most indie bands are better off never achieving, since so many of them seem to run out of ideas somewhere around track four of their second release. That’s hardly the case here, though. Knucklehead is, among many other things, Crazy Mary’s coronation as the kings (and queen) of creativity.
I haven’t always loved everything about every Crazy Mary release, but that’s really part of their charm. They take real chances on every album, mixing and matching genres and playing on a musical tightrope stretched between genius and failure. Sometimes they end up closer to one end of the rope than the other, but when you’re constantly exploring new territory a few false leads are bound to come along. What they do well they do so well that simply repeating their most successful ideas a dozen times on a single disc would give them the kind of cohesive, polished effort that the dull normals of the world crave. Crazy Mary is rarely normal, and never dull.
This time around they call on help from avant garde violinist Walter Steding, mandolinist Jason Spittle and the The New York Horns brass and reeds unit. Thus fortified, they attack everything from the flower power pop of “Let’s All Have A Party” to “When The Shit Hits The Fan” with a hint of Memphis soul, from the Ali Baba on hash mood of “Land Of The Jagged Mountains” to the 12 bar blues of “Still Water,” with stops along the way at points familiar and points found somewhere past the ‘here be dragons’ markings on the mainstream musical map. In other words, the music is all over the place, but you’ll want to visit all of the places it’s over.
Over the course of five albums, Crazy Mary has progressed from an “I wonder what they’re up to this time?” band to a “I can’t wait to hear what they do next!” band. They keep moving, sometimes forward, sometimes sideways, sometimes in directions uncharted, and if there’s a spark of adventure in your soul, you’ll want to follow along. -Shaun Dale

The prolific NYC quartet Crazy Mary hits their stride with this collection of offbeat musical fun and games. Equally adept at styles from rock to soul to Middle Eastern fusion, and most anything in between, Crazy Mary’s skewed take on the world is sure to put a smile on your face. “When the Shit Hits the Fan” and “Designer Dog” are among the standout tracks… you’ll have a good time picking your own faves. Recommended for anyone who likes a little Zappa with their Residents, or vice versa. -Jon Sobel

While touted as the “original NYC garage music,” Crazy Mary is anything but a typical garage band. Intentional and original, it will be hard to describe them for anyone who has not heard them. Knucklehead is a culmination of years of paying their dues and keeping their day jobs.
Let’s attempt to describe the sound. There is something fascinating about the overall sound. Lock the B-52’s and They Might Giants in a room with punk/grunge garage band out of some college town and do not let them out until they can agree on something. Maybe that’s a good image. Maybe. Title track, “Knucklehead,” maybe reveals a little of each of us if we’re honest. That person lurks inside us all.
Overall, there is some genius inevitably in the eccentricities of this music. Bring some vocals to the front and I might buy it wholeheartedly. College DJ’s need to get their hands on this kookiness. -Heather Wiederstein

LEFT OFF THE DIAL

Knucklehead is the fifth release from this New York City based band, and throughout this record, they never stray too far from the basic garage rock that the city has always been known for. All of the major influences are accounted for; from the Velvets and the Ramones to Blondie and the Talking Heads – it’s not necessarily a potpourri of different sounds, but the band obviously knows what the sound they are shooting for.
Although Sophia Jackson handles vocal duties on each track, Crazy Mary shy away from her taking lead vocalist duties – nearly every song features Jackson singing along with either George Kerezman or Charles Kibel – together creating a chant-like sound that goes against the often cliché aspects of the woman-fronted rock band. The instruments are pretty minimal throughout: your basic drums and guitars are fleshed out with organ and violin. The first half of the disc is the strongest, with my favorite track being “Brian Jones,” an ode to the Rolling Stone, where Jackson’s detached vocals recall Nico at her finest. This is followed by “Let’s All Have A Party,” which continues the Velvet Underground feel, and made me immediately think of “Who Loves The Sun.” “When The Shit Hits The Fan” is a funk-inspired workout featuring the New York Horns, and “Land Of Jagged Mountains” features sitar and violin, carrying a distinct Indian feel. -Nick Doyle