Reviews: Burning Into The Spirit World 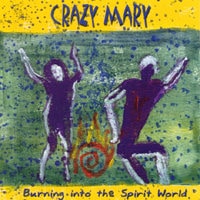 I remember this band for 2 reasons. 1. The music is like nothing I’ve heard before. 2. The lead singer is afflicted. Sophia Jackson has a method of delivery that is like David Bowie’s dead wife: an ethereal, alt-pop vocal that languishes between gothic and heavy-hit surf (minus the blues repetition). That makes her as hard to forget as your best Living Dead film, especially when she’s floating through new Eastern-spooked tunes like ‘Crazy Mary (But I’m Not)’, and the witch doctor approved ‘Monkey Magic Medicine’ which promises more than The Residents ever managed to deliver.

(The 3rd unofficial reason I remember them is that Crazy Mary was a main character in The Thin Man Goes Home, a component of one of the best mystery-comedy series ever. Go rent it. Okay, back to the music.) That first cd I heard was called She Comes in Waves, and it made an impression. Truly unique acts don’t come often, but they know where to park.

Some have called Crazy’s blend psychedelic, garage, Velvet Underground, Blondie, The Cramps, and the ever-popular alt-rock. Depends on the listener. Myself, I tend to hear an audio Swiss army knife, incredibly varied and spitting in the face of classification. Except that it ain’t straight pop. Oh no. How else would they be racking up an AMAZing amount of college radio play from sea to shining sea? With the cd came pages and pages of telling airplay lists from the past several years, a feat I wonder if even our old Beatles are collecting up from today’s spastic youth.

Though the lucky 13 songs here are studio grown, a true taste of their live side careens through titles such as ‘Dose Me On Up,’ a duet with guitar-man Charles Kibel. Nick Raisz likes to keep time like a jazz drummer in clogs, and George Kerezman busies a bass against a 3rd raised voice. Together, the pitch is like odd socks, blue and black together, and to the colorblind like myself you can barely tell who’s who.

A few stats: their Astronaut Dubs release has played 360 stations, charting on 27 stations in the top 30. They have been on a couple comp albums, have gigged the hell out of NYC (like Luna Lounge and Acme Underground), and The New York Press calls them ‘hip and crazy get down on your knees voodoo dancing.’

Crazy Mary is like that Wonderful Brown Sauce you see entrusted to Chinese menus. You’re not sure what the hell’s in it, but it’s a singularly strange, exotic and at times full moon taste that’s hard to take a doggie bag on. You wanna turn to the next track and finish it all in one place. –Ben Ohmart 5/06/01

All indications from the primitive cover would have you preparing your boda bag for the next desert tribal festival. And if you read my last CM review (and I know I did) you’ll be expecting to throw this out with all the useless 12 inch double extendo dance space remixes. Well, my 60’s psychedelic garage surfing minion, luckily for you, and me, and Crazy Mary, this here’s the real deal. They were just screwing around with all that astronaut crap, trying to throw us off their scent. The fantastic bass lines I was talking about are so much better when the other instruments are in agreement with them. Yes, Sophia Jackson still occasionally sings off-key, but in the context of a true and actual song, it’s endearing.

On “The Rain In Memphis” she breaks her stiffness for a distorted chorus from a lonely pay phone. Charles Kibel’s fuzzy guitar follows her story, instead of leaving her alone in the rain. And sweet, welcome tunefulness on my beloved bass thanks to George Kerezman. It’s full of energy and purpose that matches the angry walk in a nighttime storm. “Voices Of Freedom” is a little more stoic and hymn-like with its rich organ and anthemic tone. Kerezman affirms this with folk-singer backing vocals. Meanwhile, I am again reminded of Flaming lips by weird, wormy synthesizer making sure the song is not taken too seriously. Seriously cool, however, comes in “Monkey Magic Medicine.” Electric sitar (now obligatory) and know-it-all arrangement make it a fun and sinister opium den full of trenchcoats. It follows a “Love Potion #9” theme all the way to Cairo.

Namesake “Crazy Mary” is dark outsider folk in a Nick Cave vein. Slow, plodding and creepy, the vulnerable Mary is nuts in a sympathetic manner. “My friends all say my mind is on vacation. Paranoid delusions I have got. The doctor says I must take medication. My friends all say I’m crazy, but I’m not.” Each clever verse drags with anticipation, waiting on edge to discover what lies around the next corner. The surf guitars echo throughout while the slow eastern arrangement coils and rattles when it reaches bottom. “Freak Out” is great mind-altered surf a la Breakfast With Amy. Sounds like Peter Fonda fronting The Trashmen. And just because I haven’t mentioned him doesn’t mean Nick Raisz is a slouch on the drums. He rolls and crashes like the tides. This time, the imbedded dub noises work.

The lowercase X styling of “Dose Me On Up” are staccato beats and bisexual vocals without the Exene dissonance. Crispy drums and crunchy guitar hail from a bygone post-punk era. Jackson circus tents on every other line of the chorus and brings it down for Kibel to catch her on the return. The 2 chorded story flips in similar fashion, “It brings me down, tosses me round. It’s dragging my ass to the wrong end of town.” Kerezman’s spooky, distorted delivery is backed by warbling Hammond and clean bluesy guitar on the ultra-cool “It Calls Your Name.” Some of these foreboding fables are in a Squirrel Dub Zipsters bent. It’s hard to tell if the narrator’s pointed finger is warning or threatening. Springy surfabilly guitar with plenty of wah wah adds a back-alley backdrop.

The hippie-folk dreamscape of “Confusion Reigns” is sentimental and pretty. But for me also pretty boring. Kerzeman and Jackson’s stunned vocals plow the same row until she throws an occasional seed. “Moon Song” on the other hand is prettier and ends too soon. Kibel plays lovely tropical acoustic tones and Jackson croons sweetly over the soothing bass. Then some self-abusive barnyard fun that would make The Hickoids proud. “Chicken” features slide guitar, harmonica and a lot of Ween silliness, “Choke your chicken now. Let me show you how. Grab that chicken ’round the neck. Shake it like a nervous wreck.” “Astral Telepathy” sounds like wind chimes while watching the stars. Spacey, but still retains the idea that it’s taking you somewhere. They allow for a lot of depth and lift out of it with angelic builds. And if that didn’t doesn’t get Jack Horkheimer’s telescope extended, “Voyage To Uranus” sure will. Actually, it just has an oscillating synthesizer. The rest is pretty straight instrumental which only slightly resembles the Hitchhiker’s Guide theme without the banjo. The Pentecostal hoe down “Dance With Snakes” is an altar call to that most holy sacrament, “Born in the backwoods of Georgia, by and by. Falling in trances shaking on down in the name of God.” As Moe the bartender once said, “I was born a snake handler, I’ll die a snake handler.”

I think they send out the EP so expectations will be low for the album. Then they hit you with all this fun stuff and you’re floored. But Crazy Mary, I’m warning you, these songs are your children (or 116 cats). Don’t leave them stripped and exposed like that again or I’ll turn your asses in.

On a surfer scale one being Gidget and ten being The Big Kahuna: Burning Into The Spirit World rates an eight, Moon Doggie. -Ewan Wadharmi

Yes, more indie garage dub beatnik psychedelic folk from NYC. More fun stuff from harmless eccentrics with day jobs and a good publicist. The materials in the press kit compare Crazy Mary to Pylon, The B-52’s and The Mekons. I can see it but there’s nothing earth shattering about Crazy Mary. They write some great songs and a bunch of decent ones. 15 years ago they would have fit comfortably on Hoboken’s Coyote Records. Today they’re a bit of an anachronism with a great set list of songs to dance to at various small clubs in the NY area.

I like this CD very much, and there’s a lot of good material on it, but it’ll never make a dent in the marketplace. Commercial radio is a joke and college radio has stagnated into a pale imitation thereof. There are still some good stations and individual DJs to be sure, but, to let you know how much has changed, back in 78, with no experience at all, I was able to get a 1 hour afternoon slot at my college. There were few rules and no politics. To hear the station you had to have your radio plugged into the school’s electrical grid. Now that’slow tech, baby.

Crazy Mary’s publicist does a heavy push toward college radio, with some degree of success. I don’t see how this contributes to sales but it does lead to airplay, which can then be noted in future press kits and PR efforts to promote local shows. It’s a wonderful catch-22 circle jerk that bands with money and desire go through. Some do it in hopes of making it big, often by happy accident. I doubt Crazy Mary is that deluded. These folks have been around, and what they are doing is being professional. They’re recording, promoting and playing. It’s a way of life and a calling. Burning Into The Spirit World will rack up almost all of its sales at shows, as in announcements of “We have T-shirts and CDs for sale after the set.”

“Voices Of Freedom” is or should be the single from this CD. Something tells me their live shows must be a treat, with everyone dancing and enjoying themselves immensely. Visitwww.crazymary.com to download their live video. (5-13-01)

Burning Into The Spirit World is the fourth release from Crazy Mary, and fans of the band’s quirky psychedelia will be comforted to know that time hasn’t tamed the quartet’s adventurous spirit… you’ll start hearing about them even if there isn’t an ultra-hip college radio station in your neighborhood. Meanwhile, they may be hanging out in a musical ghetto of their own making, but they’re among the most talented people on the block. Hope to see them out of the ‘hood next time around. -Shaun Dale