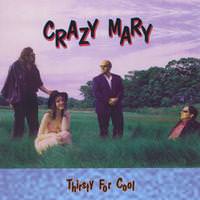 Crazy Mary is the classic dirty New York indie band. You know the group: They should have been famous years ago but, well, commercial radio and our MTV culture suck so it never happened. They stayed the course, however, even if it meant playing surrounded by the stench of stale beer and urine and having to listen to that crazy guy who’s always in the third row screaming obscenities.

And more than that they were your favorite band in college; full of just enough edge balanced with just enough common sense to string some cool grooves together. You drank to them, got laid to them, smoked to them and saw them every goddamn weekend down in the Village at that little shit-hole club. Then you grew up, moved to the suburbs and became what you used to hate. You didn’t stay the course, my friend. And now, Crazy Mary has returned, somehow, to save you.

And they do it with the intimate sharp-edged voice of Chrissie Hynde (Pretenders), the rollicking horns of Madness, a wonderfully dry rhythm section and the crunchy droning guitars of the Velvet Underground. Goddamn, has it been 7 albums already?

The best part is that the album, Thirsty for Cool, is what you always knew it would be. It is tinged with enough musical influences to make your old Music Appreciation professor’s head spin. There is Mod Pop, 70’s punk, Americana, straight out blues rock and that wonderful attitude. You worshipped the guys and loved the girl because they oozed cool from their every pore and they still ooze it, just now it comes out of your speakers. You close your eyes and are back in the Village walking past The Strand… -Dave Terpeny Sr. Editor

So I’m sitting here listening to the latest from Crazy Mary and wondering just what it is I like so much about this band. They’re too eclectic to lock into a category, so it’s not really that they play a particular kind of music I like. They always take chances, and the truth is, sometimes their creative reach exceeds their technical grasp, so it’s not impeccable musicianship or glossy production.Then it hits me. Everytime I put on a Crazy Mary disc, I just have so much fun listening to a band that obviously has so much fun playing. Seven releases in, they’ve yet to get rich and famous, so they’ve got to be in this for the fun and the music, and it shows. Their dedication held them together through the tragic death of original bassist George Kerezman, who’s replaced by Armand Militari on this release, and while lead singer Sophia Jackson has stepped away from the mike in favor of newcomer Kristin Smith, she hasn’t strayed too far, with guitar credits on three tracks and co-writing credit on the title cut.

The new lineup (guitarist/vocalist Charles Kibel and drummer Nick Raisz are the holdovers) maintain the non-formula formula that’s made Crazy Mary an indie favorite. They get major support from violinist Walter Steding again, and extensive use of the New York Horns lends an R&B undertone that largely displaces the off-beat psychedelia of previous albums, making this perhap’s the band’s most accessible work yet. Don’t let that fool you, though. There are still a plenty of dangerous curves on Thirsty For Cool, which, if you’re a Crazy Mary fan, is just what you hope for. If, for some strange reason, you’re not a fan yet, those curves will be the hooks they reel you in with. -Shaun Dale

Those that have really been with us for the long haul of almost a decade now probably remember the earlier accolades that I blessed Crazy Mary with. This New York outfit doesn’t stop and rest on their laurels however as they arrange their garage rock. Unfortunately for the band and the world in general founding bassist George Kerezman passed away in ’03 and the band also lost their vocalist in Sophia Jackson. But Kristin Smith strikes away the fear of adding a new chemistry to the band with her vocals that in my opinion are quite better than Sophia’s. “Thirsty For Cool” is much more refined and polished than previous efforts and is worth a studied listen. -J-Sin

Here’s a new genre for you. Punk80’sMellow. Don’t blame me. Blame Crazy Mary. Or, rather, give them credit. It’s such a quirky but smart collision of styles as to leave you scratching your head but scratching your head in a way that signifies positive bemusement as opposed to what-the-hell-is-this-shit. Well, you might go, “What the hell is this?”, but hopefully you’ll be smart enough not to call it shit. Cuz it’s not. It’s simply offbeat and demanding of smarts and open-mindedness on the part of the listener. Oh, yeah, and it really helps to pay attention to the lyrics, since that’s where half the fun lies. -Kristofer Upjohn

This eclectic rock band puts out like fifty albums a year. I feel like I review them in every batch. I’m glad I listened to this one though; I used to consider them dopily psychedelic and irritating, but their new one has a very straightforward, fun, swaggering sound with more soulful, dynamic vocals than in the past.