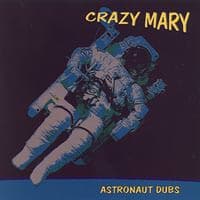 Real-life drum’n’bass, at least in the sense that all the other instruments keep falling out, with mantras and guitar solos; hence, very early-’80s New York (see: Liquid Liquid, Konk, Bush Tetras). Five songs, seven versions total, five-person band from Brooklyn (one low voice, one high), nobody named Mary. Free-floatingly shapeless, but jovial. Unexpected reference points: “She’s a Rainbow,” “Lightnin’ Strikes,” “Baby One More Time.” Not to mention “Johnny Thunders/He left his soul, his body, and his heart/Rock and roll will never be the same,” right before everybody starts mimicking (sampling?) “Johnny” from the first Suicide album. -Chuck Eddy

Leave it to Ariel Publicity to represent yet another wild, wonderful beast—the latest package on my desk from the take-no-prisoners publicity firm is a New York-based dub band that sounds like the B-52s operating heavy machinery. It seems that lead singer Sophia Jackson, who has the prim sex appeal of a midwestern beauty queen, got stuck in a wind tunnel and never climbed out. Jackson’s vocals are alternately girlish and ghoulish and echoey all the way—she harmonizes to the tune of alien sound effects and eerily-sampled spoken word. Sometimes, she sounds like she’s stuck in a well, and it’s comforting to know that she’s not the only one in there—every song is a multi-layered, multidimensional chant, consisting of many erratically-mixed chimes and slogans from every member of the band. The result is a strange but appealing album that’s a little like listening to Satanic messages on a backward-playing cassette deck. “She Comes in Waves” is an example of what Crazy Mary does best, the rock-and-roll beach party on the shores of some other planet. -Annie Lin

Their latest, Astronaut Dubs, is an EP length collection of remixes from She Comes In Waves and their 1998 debut, Passion Pit. I haven’t heard Passion Pit, so I don’t know if they improved on “Lightnin’ Strikes” or “Johnny Thunders,” but “Shock Me,” from Waves, was born for the double dub treatment it gets here. The good news is that Astronaut Dubs finds the band exploring ways to reshape their sound, and the ways they find work pretty damn well. Well enough for that next step? That’s up to people like you to decide. Which you can’t do if you don’t check them out. Which you should do. -Shaun Dale

Typically the better Indie rock bands have the kind of sound that’s hard to nail down in a description. With that said who the hell knows how to describe Crazy Mary. Their sound sways amid electronics and trippy guitarwork along with cascading drums. Their singer reminds me a bit of the Clash and early punk yet it’s not quite that obnoxiously British. Being from New York probably lets them be this obscure and yet achieve a great sence of musical style. With a tribute to Johnny Thunders how can you go wrong? -J-Sin

Astronaut Dubs isn’t so much spacey as it is dead-on hard nosed punk crossed with hard rock. The band’s influences are easily found in their tribute track, “Johnny Thunders (Radioactive Dub)”, while “Lightnin’ Strikes (Intergalactic Dub)”, includes a legnthy homage to the Kinks’ “You Really Got Me”. Crazy Mary take the classic Kinks tune, noodle about with it a bit and overlay the Track with the words “lightnin’ strikes” “earthquake hits” and my favourite “tidal wave pants”, simple but effective, and perhaps dubbing it felt something like being struck by lightning. “Blitzkrieg” well describes this album; you’ll enjoy being hit hard by the rock and the steady beats until Astronaut Dubs reaches it s quick finish. -Jenn Sikes

Astronaut Dubs is a strange blend of something like a cross between surfbilly, dub, frat rock, and trance maybe. Like trad dub, a few songs are put through various alternate dubs and the weird surf element definitely keeps you guessing. And you know I like that. -Brian Baker