Reviews: Water On The Moon 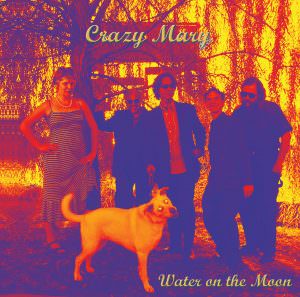 When did new wave get this dirty, and oh I mean dirty in the way that MUST be taken as a compliment, like a kid that has spent his summer playing hard and exploring every abandoned warehouse, every enticing exotic cave and ditch and field, the dirt is a badge of honour is EARNED, defines the very soul of the free spirit.

Here the dirt is in the details, you THINK you are listening to a hard rock track, and suddenly there are slithers of alt country organ coiled sly within the throbbing motor of the melody. You THINK you are listening to a raw outtake of perhaps a Blondie b-side and then new wave morphs into no wave shudders from classic boogie into something sweet and now and possibly fatal.

It’s as if Grace Slick and Karen O were sisters and fronted an alternate universe version of the Replacements.

Well until the next song that is, then suddenly we are transported into the stranger era of our pop music history and we go progressive we feel folk, the ballad becomes this driving twisting epic thing, music to play when storms threaten.

Sometimes, just as you are feeling at home with Em Z’s bawdy take on the rocked rolled vocal, the band get eccentric, the harmonies get abstract and the mood gets spiky creative.

This garage band has a garage that has not only oil stains and wounded tunes, but shattered TVs, blistered comic books and stranded buckets full of soul.

“Got to be starting something, everything has got to change”
Opening their latest disc with a call to arms, New York’s Crazy Mary convey a positive message in “Eyes Above the Clouds” exhorting listeners to “use the weapon of love”. Freewheeling in their approach, each track is infused with stellar playing and a particularly soulful feel that nods in the direction of the late sixties. There is a great sense that these people really enjoy making music together, which bodes well for finding a loyal audience, as that natural ebullience is something which cannot be faked. People know when it’s real and get swept up in the energy.
“Gravity” is my personal pick of the pack, with clever shifts in time signature and nice harmonies all wrapped in an ethereal chord sequence.
Reminiscent of the experimental side of the Jefferson Airplane, Crazy Mary at times takes chances in arrangement and form. While their songwriting heads are in the clouds, they do keep their feet on the ground with solid grooves.
Much to be commended here, though I am surprised that I have not heard of them until now. They have been turning out albums for the past decade and I have some catching up to do.
You may peruse their discography here and then take some time out to learn more about the band
Music of this caliber should be finding a place on the play-lists of contemporary rock stations. We should demand more of that medium. In the meantime, independent ideas still thrive on the net. Time for a change?

I think we’ve all known of or seen a “Crazy Mary” in our lives. You know, the old lady who wears 6 layers of clothes on a 95 degree day, pushes a shopping cart and is usually mumbling to herself! You say to yourself, “I wonder what made her that way”. I guess the same thing happens to aging musicians! I couldn’t think of a better name for this group than Crazy Mary! Hell, they even forget what genre they’re supposed to be playing!

All kidding aside, though, Crazy Mary does offer a unique blend of styles and genre that you are not likely to see on one single CD. To say it borders on being post-Dada, or post-RIO music would probably be fairly accurate. Frank Zappa would probably be proud of them and who knows, if he were alive today he might even name a child “Gravity” or “Way Too Freaky” after them! Of course, he might name her “Orgasmic Annie”, too!

Crazy Mary is sorta like a childs top. As the top slows down it starts to wobble. When it wobbles one way it touches on rock, when it wobbles another it touches on punk/goth, than it wobbles again and touches, dare I say it, country! You just don’t know what to expect from them! Their music is catchy and full of good hooks to keep you wanting more. Em Z says their music is “transporting” and that’s true. They remind me a lot of Cream, Donovon, early Jeff Airplane and some of the other groups from the 60s. If you had something to smoke, you lit up, put something like this on and let the music carry you away to a better place, “73 men sailed out from San Francisco Bay”, Oh!, sorry, flash back to Blues Image!

The playing is superb! “Water on the Moon” adequately showcases everyone’s talent. It has some great drum fills by Raisz, great lead guitar work from Kibel, brilliant keyboarding from Parker Reilly and solid bass lines by “The Wizard”. Violinist Steding adds a dimension to Crazy Mary which, unfortunately, is seldom seen in rock bands today. It’s things like this which help make a group’s music unique.

So, if you’re tired of sitting in your “white room”, jump on board the “magic bus”, smoke it if you got it, take along a “ee-lek-tric-kle banana” and some “incense and peppermint” for lunch and let “Crazy Mary” transport you to a “land others may have missed”!

Experimental Rock band Crazy Mary. Combines energized rock with psychedelic overtones, first time we listen the music feels like transporting to another time and place. From the latest album ” Water On The Moon ” with a single “Gravity” bring the magic into the music. Crazy Mary explore the music with melancholic – emotional songs uniquely combined rock music with violin orchestral rhythm.