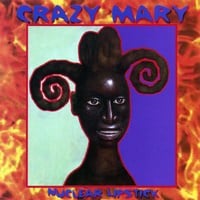 A week or two ago, I got a package in the mail from Vu. In it were two CD’s for review, and due to illness, and being really busy with other things, I kinda ended up sitting on ’em for a while. One of them caught my eye instantly, and I decided that that’s the one I’m going to be talking about first.

Nuclear Lipstick by Crazy Mary has an album cover that can only be described as bizarre, in that “90’s throwback” sorta way. It could probably be mistaken for a bad post-grunge CD based on the cover alone. Fortunately, that’s not at all what we have here.

At its core, this is psychedelic rock, but it’s done in a surprisingly (and refreshingly) strange way thanks to a combination of a fiddle player with a really unique style, the entire band sharing vocal duties, and the reverb that quite a bit of it is drowned in. You can tell that they’re drawing from a pretty eclectic pool of influences. “Americanized” opens with a syncopated drum beat and fuzzed out guitar, and features probably the most political lyrics on the album. “Nuclear Lipstick”  features a strange, sort of Primus-y guitar lead and sci-fi keyboards, and might be one of the more straightforward tracks on the album. “Damn Good” is an instrumental space jam with a laid back sound and a really cool bass part, and it leads quite well into the reggae-influenced intro of “Baby Don’t Take it Away.” Other highlights include “That Same Old Feel Once Again,” and the instrumental, “The Dolphins are Swimming.”

Overall, while it’s not something I’d typically listen to, it’s still definitely a pretty good listen, especially in the right mood, and I’m sure quite a few people reading this will enjoy it. Unfortunately, I don’t have any tour dates or anything to post. The band’s website and MySpace page list nothing. But I’ll definitely be keeping an eye out for ’em! -Soup

Honestly, I’m not quite sure what to make of Crazy Mary in general or Nuclear Lipstick in particular. The dreamy Moving In Space seems to go on for hours (but actually clocks in under four minutes). Damn Good…isn’t, but it’s not bad, a somewhat discordant, druggy, slow-paced instrumental that starts off in the middle of nowhere and pretty much stays there. For some reason it brings to mind a trip down a two lane road about seven miles off of I-59 through Mississippi. Even when the band rocks out, on That Same Old Feel Once Again it’s difficult to get a handle on what they’re doing; think Chuck Berry meets Jonathan Richman. And The Promise sounds like The Fugs, off of one of their ESP Disk releases. That, of course, is a compliment.Mistake Number Five, another instrumental, sounds at times like the droning of an intergalactic refrigerator, but at the same time is kind of cool as well. The title of the closing track, Woke Up Mixed Up, really sums things up nicely. And yet…I keep listening over and over to The Dolphins Are Swimming, yet another instrumental — too short, by half — which vaguely reminds me of The Garden Is Open by The Fugs.

People are either going to love or hate Nuclear Lipstick. Or maybe a bit of both. I have yet to make up my mind, entirely. My feeling right now is that I might not walk across the street to see Crazy Mary but that I’ll nonetheless be playing Nuclear Lipstick — occasionally — ten years from now. -Joe Hartlaub